US
The S&P 500 Index closed at the highest level since February, after gaining 0.9%, as China seemed to strike a conciliatory tone in reaction to President Donald Trump’s newest escalation of the trade war between the two countries. Technology shares led gains, sending the Nasdaq Composite Index to a record high.

Ten-year Treasury yields traded little changed, and the dollar dropped against most peers after U.S. consumer prices rose less than forecast in June.

The gain came as global markets rallied after China stopped short of detailing how it will retaliate against U.S. President Donald Trump’s latest threat, a sign the conflict might not escalate further for now.

Asia
Chinese equities gained 3.5% over the week despite falling 0.2% overnight. The index remains one of the world’s worst performing benchmarks after tumbling 14% over the previous seven weeks. 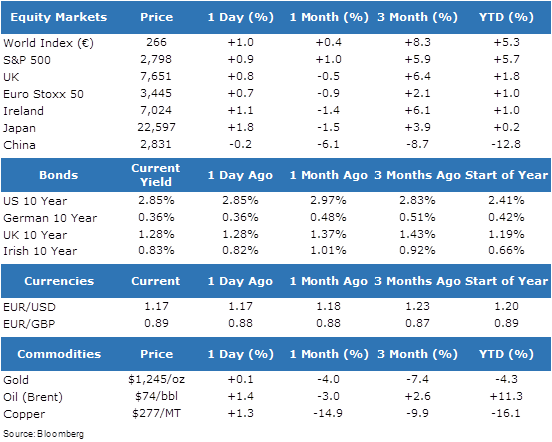